Equity Residences Managing Director Greg Salley worked with the Italian developer and a team of architects to bring to life one of the most unique residences in the old walled city of Siena.

When you first walk through the streets of Siena, you feel transported into the Middle Ages. Buildings around you, with centuries-old stone walls, wooden doors and shutters, and their elongated arched windows create an ultimate atmosphere of the Old World. You except to turn the corner and run into troubadours singing for visitors in dimly-lit taverns. 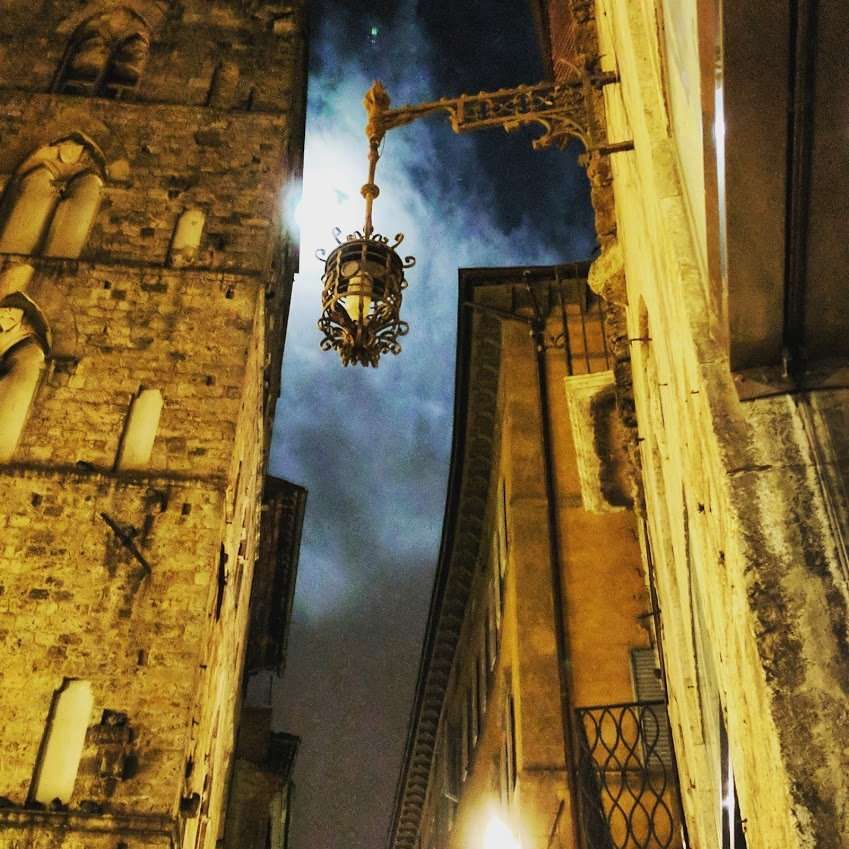 Siena’s buildings have stood preserved through the centuries and have changed little since they were first constructed. At least, the change is barely perceptible on the stone facades.

When you get to the two-story house built in 1492 for a noble Chigi family, you catch an imperceptible change. The building front door is not wooden, like most of the surrounding buildings, but is made of grey metal. And when you get inside, you may just find an apartment unique for Siena in both its design and layout.

Welcome to one of the most unique and beautiful residences in the old walled city of Siena.

The new Equity Residences Platinum Fund apartment is a result of collaboration between Greg Salley, the firm’s Managing Director, and a team of Italian developers and architects. Equity Residences bought the apartment and remodeled it to meet expectations of the American investors while preserving the local Italian flare in design and details. 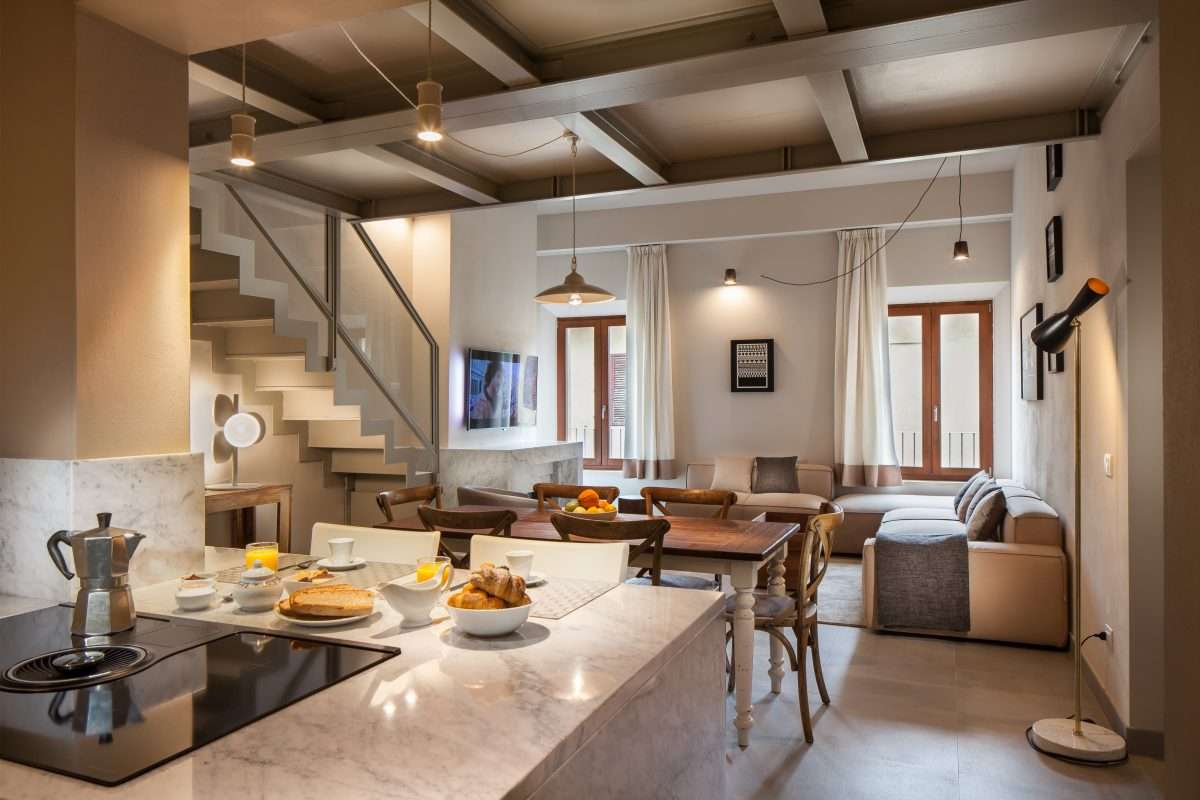 I sat down with the team responsible for bringing this apartment to the market and asked about the history of this building, which goes back as far as the Columbus discovery of America, about architectural ideas brought to life by the talented designers, and unique challenges facing international collaborations like this one aimed at bringing architectural and design vision to life.

Challenges of finding a modern apartment in the old walled city of Siena.

Marco Paglialunga is the visionary developer behind the building concept. He bought it from the University of Siena and renovated the insides, bringing the stone construction to the modern level of comfort. 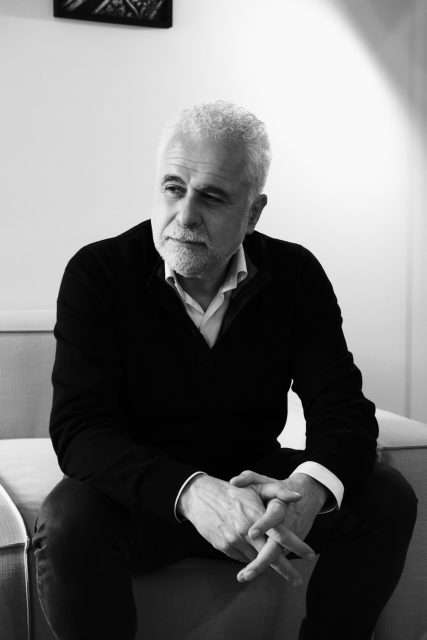 This is one of the rare buildings in the old walled city that has a full-size elevator, handicap access, and floor heating/air conditioning units installed.

Marco saw an opportunity to marry history and modern technology. He says: “The beauty of this building is not only for its historical tradition, but also the position between Piazza Del Campo, one of the most beautiful squares in the world, and the garden of the Chigi family. With time, the garden became public, so you can visit it now.

Around here you have just the church and other building in the plaza which belongs to the Contrada. Contrada is a historical tradition in Siena. So the intention was to renovate it respecting the strong historical tradition, but also meeting contemporary standards of comfort.”

Greg Salley, the Equity Residences Managing Director who discovered Marco’s building confirms that the search for a modernized building to invest in was tough:
“Prior to finding this particular penthouse, we looked at a number of places throughout the old walled City. Many of them had challenges. Some of them were very chopped up in terms of the layout of the property.
Almost all the others didn’t have a typical elevator—type access. They sometimes had these dangerous lifts that were stuck in between old stairways, with no walls and exposed chains. You could barely fit two people in there if they are hugging each other.”

Americans, who are used to air conditioning and full-sized kitchens, may find traditional Italian apartments unfamiliar and challenging to live in.

While looking for an Equity Platinum Fund investment, Greg discovered that wall kitchens and no air conditioning were standard among the apartments in the old walled city of Siena.

Challenges in modernizing a building that is protected by UNESCO.

Siena old walled City is a UNESCO-protected site, which presents its own challenges to the developers and architects. 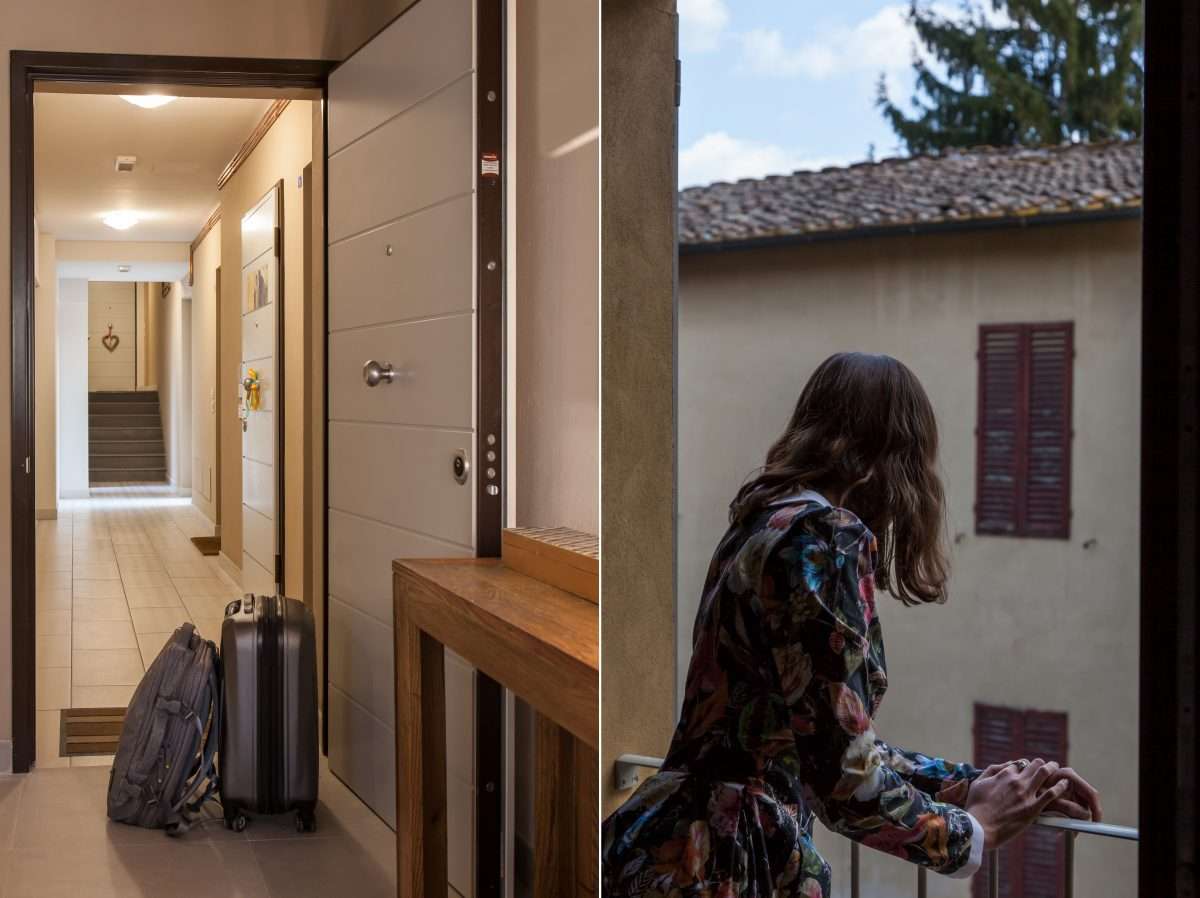 Ferruccio Ascanelli, the architect responsible for the interior of this project, says that during renovation designers “can’t change any aspect of the outside [of the building]. Not even change the look of the windows.

[When submitting a project for review], we have to demonstrate how this room would benefit from the natural light without changing the look or the shape of the windows”
Renovating a building with 1.5 meter — thick (5 feet) stone walls and the one strictly protected by the Italian and European Union laws restricting the look is no small feat. Especially when your American client has a vision of how to create a modern oasis in 500 — year old walls.

Greg says that the apartment was a blank canvas when he first looked at it.

According to him, it was a good thing because “it created an opportunity for the Equity Platinum Fund to design the place to the standards our investors expect, combining the American sensibility with the Italian sensibility. This included what we can do and what we can change, and we had a blank canvass to do it.”

Going from bare walls to an architectural masterpiece is 6 months.

First, Greg had an idea to redesign the layout of the penthouse. 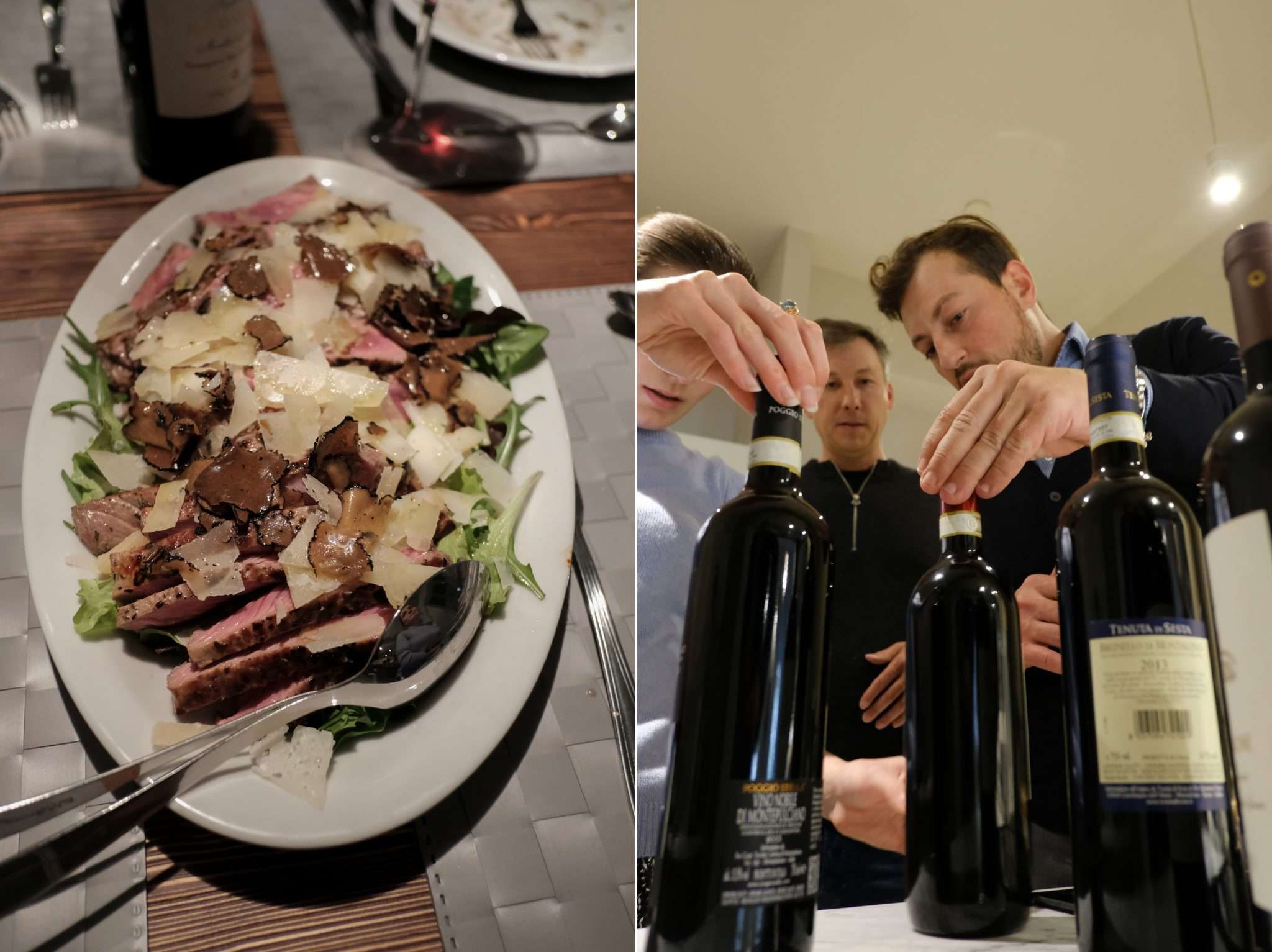 “We relocated the kitchen, and by doing that, we expanded the kitchen to make it a space to socialize and to cook. We also included amenities like microwaves, stovetop, etc. Everything you would expect to get together and cook a wonderful meal.

And we envisioned being able to use the kitchen to host cooking classes right in the penthouse, so our investors and guests can experience the best Italian cooking right in the home.

And when we relocated the kitchen, it gave us an opportunity to upgrade a master bedroom with steam showers and enlarge it.
But it considers Italian sensibility as well, in terms of how they would do some of the finishes and lighting, and it really came together.”

Greg gave a tight deadline to the Italian team — 6 months for everything, including moving walls and adding throw pillows to the handmade couch. For half a year, Italian architects and construction crews worked days and nights to bring the vision to reality.

The result of the American and Italian efforts is a combination of the Old World sensibilities and New World practicality.

The resulting penthouse presents a combination of the Old World aesthetic and craftsmanship and American practicality. A traditional fireplace is executed in the Carrara marble, mined just north of Siena. But it’s a gas fireplace and not a wood-burning one.
The open American kitchen has traditional Carrara marble countertops but is outfitted with the latest German appliances like induction stove and a sophisticated heating/cooling system designed to create a perfect micro-climate year — around.
Each room has a theme that reflects something about Siena, and even the furniture reflects the marriage of old and new, which is a theme of this apartment.

“One [room] is Tuffo [Eng. Turf] and another one is about Fonti [Eng. Water], and the other is about Verbena, which grows in Siena. And from these three we can grow the idea of the color of the walls, of the decorations, of the picture on the wall.” 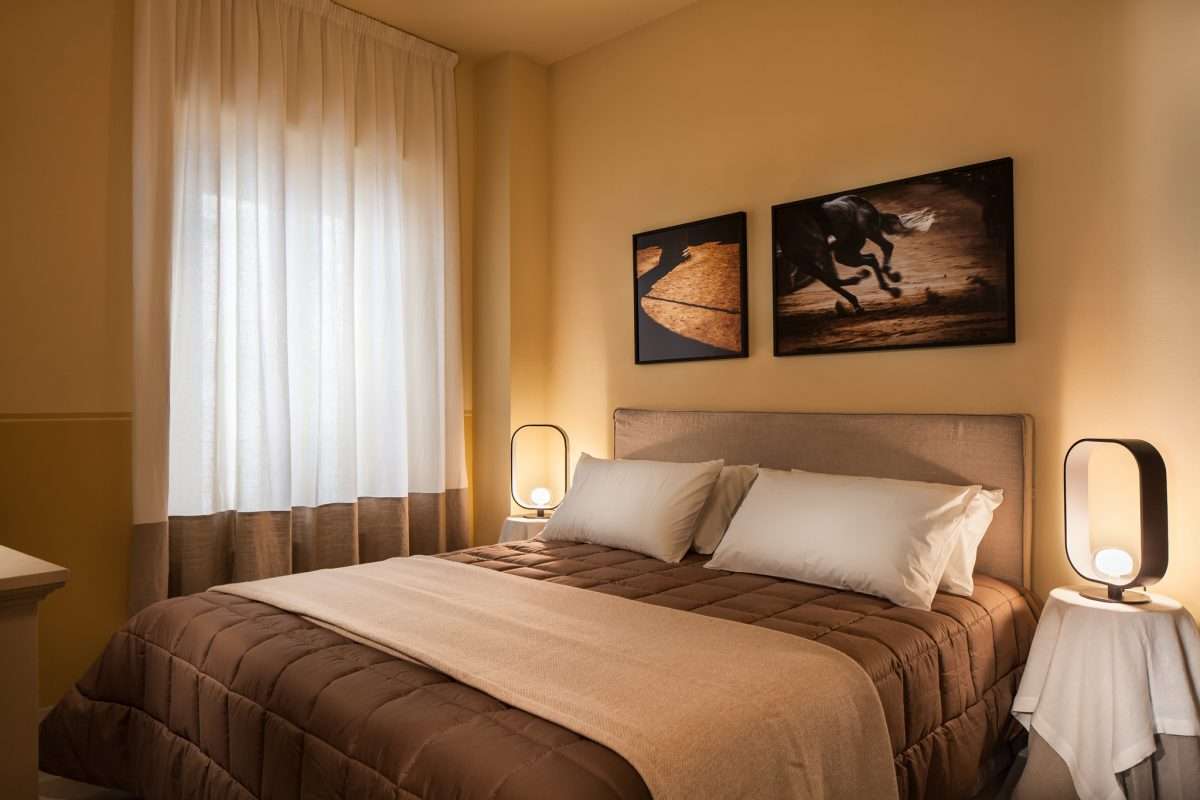 The furnishings are custom-made, from the sofa to the bed. But there are some twists. “The chair, for example, we found discarded by his owner. And we took the chair and brought to the company which made the sofa for us and we restored it,” says Ferruccio.

Architecture and design as expressions of cultural norms.

Architecture has always fascinated historians and archaeologists, who study old buildings in order to understand how societies organized themselves. Cultural differences between countries reflect themselves in architecture.

Even the American concept of the open kitchen design may seem strange to the Europeans who see the kitchen as a place for cooking and not socializing.

Italy is a fascinating country that vigilantly guards its traditions of craftsmanship, but is open to the innovations of the world. Architecture, like wine, is based on the concept of terra. Siena, Italy presents a fertile and unique terra to draw inspiration from and to execute the designer vision.

As one of the professors at my Alma Mater said, innovation is a recombination of ideas. The proof of this statement can be seen in the old walled city of Siena, behind the old walls that date back to the Spanish conquest of the American continent.

Our Concierge Recommendations For A Week – Long Trip To Siena, Italy

If you are planning a week-long trip to Siena. Italy, read on to get our luxury Concierge recommendations. Our local Concierge Vittoria can arrange tours, day trips, and private cooking classes for the Equity Residences investors and guests.

Our Definitive Guide Of Things To Do In Siena, Italy

Read our guide to find out how to get to Siena from Rome, where to shop for food like an Italian, what museums to cover, and more

Six lessons we learned buying an investment home in Italy

Buying property in Italy? Read about our experience first.

Want to stay in touch? Sign up to receive the latest Equity Residences news.

An accredited investor is someone who earned income that exceeded $200,000 (or $300,000 if married) in each of the prior two years, and reasonably expects the same for the current year; OR has a net worth over $1 million, either alone or together with a spouse (excluding the value of the person’s primary residence).